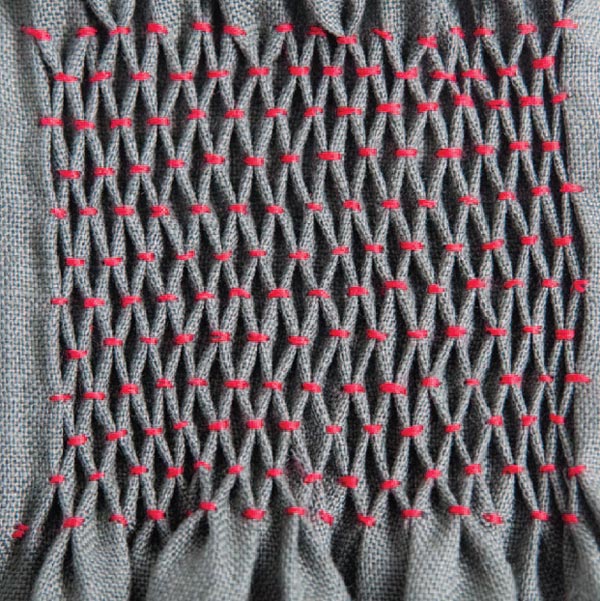 Smocking is an embroidery technique used to gather fabric so that it can stretch. Before elastic, smocking was commonly used in cuffs, bodices, and necklines in garments where buttons were undesirable.

Smocking developed in England and has been practised since the Middle Ages and is unusual among embroidery methods in that it was often worn by laborers. Other major embroidery styles are purely decorative and represented status symbols. Smocking requires lightweight fabric with a stable weave that gathers well. Cotton and silk are typical fiber choices, often in lawn or voile.

Smocking is worked on a crewel embroidery needle in cotton or silk thread and normally requires three times the width of initial material as the finished item will have. Historically, smocking was also worked in piqué, crepe de Chine, and cashmere. Fabric can be gathered into pleats in a variety of ways. Early smocking, or gauging, was done by hand. Some embroiderers also made their own guides using cardboard and an embroidery marking pencil.

Smocking is done before a garment is assembled. It usually involves reducing the dimensions of a piece of fabric to one-third of its original width, although changes are sometimes lesser with thick fabrics. Individual smocking stitches also vary considerably in tightness, so embroiderers usually work a sampler for practice and reference when they begin to learn smocking. Traditional hand smocking begins with marking smocking dots in a grid pattern on the wrong side of the fabric and gathering it with temporary running stitches.

These stitches are anchored on each end in a manner that facilitates later removal and are analogous to basting stitches. Then a row of cable stitching stabilises the top and bottom of the working area. Smocking may be done in many sophisticated patterns.