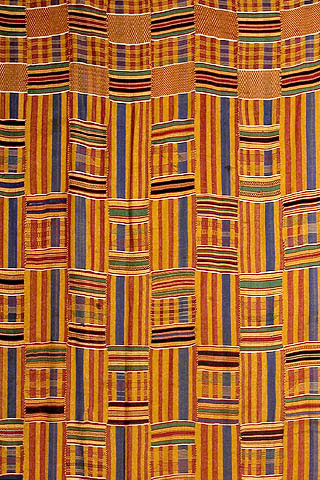 Kente is a type of silk and cotton fabric made of interwoven cloth strips and is native to the Akan tribe in Ghana. Kente is made in Akan lands such as Ashanti Kingdom and by Akans in Ivory Coast. It is also worn by many other groups who have been influenced by Akans. Kente comes from the word kenten, which means basket in Akan dialect Asante. Akans refer to kente as nwentoma, meaning woven cloth.
Share

The icon of African cultural heritage around the world, Akan kente is identified by its dazzling, multicolored patterns of bright colors, geometric shapes, and bold designs. Kente characterized by weft designs woven into every available block of plain weave is called adweneasa. The Akan people choose kente cloths as much for their names as their colors and patterns. Although the cloths are identified primarily by the patterns found in the lengthwise (warp) threads, there is often little correlation between appearance and name. Names are derived from several sources, including proverbs, historical events, important chiefs, queen mothers, and plants.

It is an Akan royal and sacred cloth traditionally worn only in times of extreme importance and was the cloth of kings. Over time, the use of kente became more widespread. However, its importance has remained and it is held in high esteem with Akans.

A variety of kente patterns have been invented, each of which has a certain concept or concepts traditionally associated with it. For example, the Obaakofoo Mmu Man pattern symbolizes democratic rule; Emaa Da, novel creativity and knowledge from experience; and Sika Fre Mogya, responsibility to share monetary success with one's relations.

Legend has it that kente was first made by two Akan friends who went hunting in an Asanteman forest found a spider making its web. The friends stood and watched the spider for two days then returned home and implemented what they had seen.

West Africa has had a cloth weaving culture for centuries via the stripweave method, but Akan history tells of the cloth being created independent of outsider influence. Kente cloth has its origin in the Ashanti kingdom, and was adopted by people in Ivory Coast and many other West African countries. The origin of kente is in the Akan empire of Bonoman. Most Akans migrated out of the area that was Bonoman to create various states.

This article uses material from the Wikipedia article Kente cloth, which is released under the Creative Commons Attribution-ShareAlike 3.0 Unported License 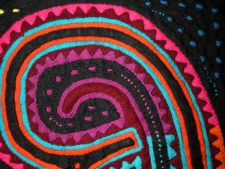 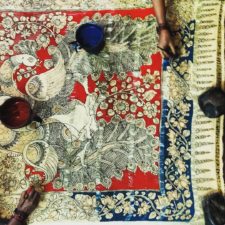 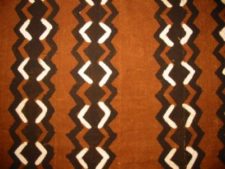