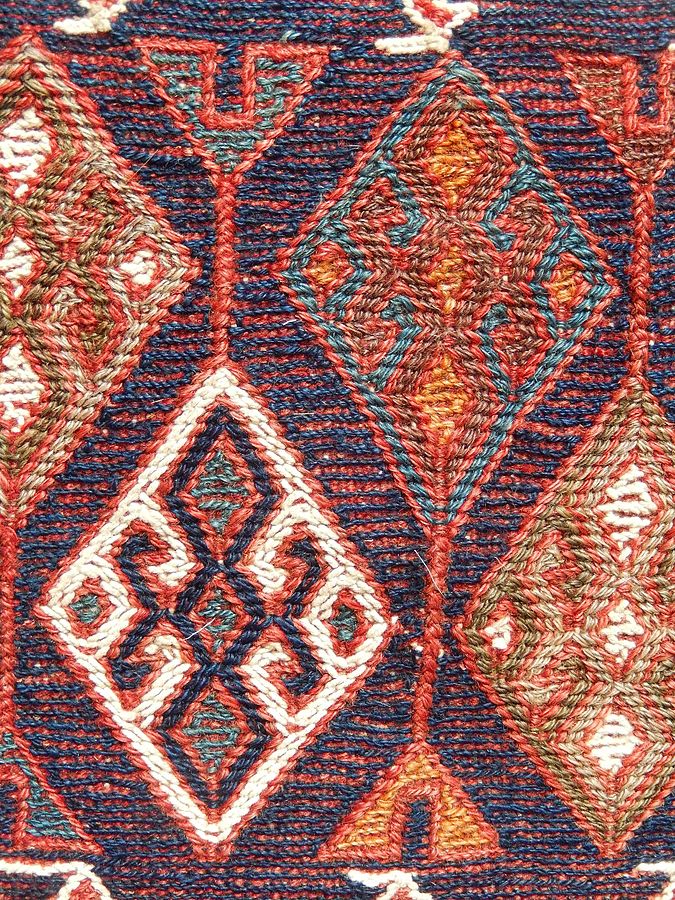 Soumak is a tapestry technique of weaving strong and decorative textiles used as rugs and domestic bags. Soumak is a type of flat weave, somewhat resembling but stronger and thicker than kilim, with a smooth front face and a ragged back, where kilim is smooth on both sides. Soumak lacks the slits characteristic of kilim, as it is usually woven with supplementary weft threads as continuous supports.

The technique involves wrapping coloured weft threads over and under the warp threads, adding strength and embroidery-like pattern.

The technique of making a soumak involves wrapping wefts over a certain number of warps (usually 4) before drawing them back under the last two warps. The process is repeated from selvedge to selvedge. The wefts are discontinuous; the weaver selects coloured threads in turn, and wraps each within the area which is to have that particular colour. Unlike kilim, the back is left ragged, with all the loose ends of the differently-coloured weft threads visible, sometimes several inches long, providing extra thickness and warmth. Also unlike kilim, there are no slits where colours meet, as there is a supplementary or structural weft which supports the coloured pattern weft. Some late Soumaks made by the Kurds are however "weftless", lacking the structural weft support, and the stitches naturally overlap.

Soumaks tend to be finely woven, and although not as durable as piled carpets, they are stronger than kilims. The soumak wrapping often covers the whole surface of a bag or rug, but it can equally be applied in decorative strips, contrasting with the plainer and thinner flatweave areas. For example, camel bags from Malatya in Eastern Turkey could be woven in simple flatweave stripes of red and blue, with broad strips of soumak weft-wrapping with motifs for fertility and protection.

Bags were sometimes woven with a face of soumak, with a tapestry-woven kilim-like top creating slits between blocks of colour: a rope was threaded in and out of the series of slits to fasten and close the bag Sizes vary, from carpet format through bags for bedding or for use on pack animals, to tiny tribal domestic bags. The following images show the appearance and construction of just such a soumak saddle bag, woven in Luristan at the end of the 20th century. The Lurs sometimes, as here, combine soumak and knotted carpet piling to adorn a single piece. To form the motifs, the weaver may push the weft threads about to form curves or slanting shapes as desired.

The name Soumak may plausibly derive from the old town of Shemakja in Azerbaijan, once a major trading centre in the Eastern Caucasus. Other theories include an etymology from Turkish sekmek, to skip up and down, meaning the process of weaving; or from any of about 35 species of flowering plant in the Anacardiaceae or sumac family, such as dyer's sumach (Cotinus coggygria), used to make dyestuffs. If this last is the source of the name, then it is derived from the Arabic and Syriac word summāq, red.

This article uses material from the Wikipedia article Soumak, which is released under the Creative Commons Attribution-ShareAlike 3.0 Unported License.