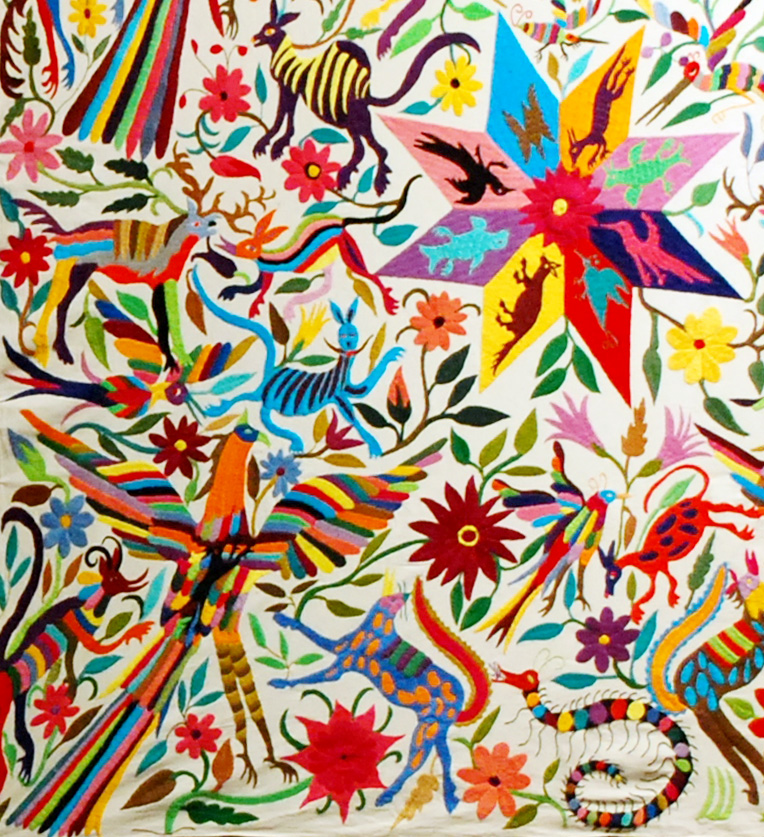 Otomi embroidery is a traditional technique from the Otomi people living on the central plateau of Mexico. Stylized figurative elements are arranged in a mostly symmetric form. According to legends, the animals depicted stem from cave paintings in the area, and often figures from amate paper cut outs made by local healers, however the style has influences of Spanish and aztec aesthetics as well.

Following a severe drought in the area in the 1960s, a simplified form of the craft, called Tenango, was developed to bring new sources of income to the region.

There is evidence that embroidery existed in the pre Hispanic period in Mesoamerica but it underwent radical change with the introduction of European techniques and designs. It has always been traditionally women’s work, with daughters learning from mothers. Even today, most of the work is done within individual families, but there are cooperatives of women who work together to produce and promote their products.

The embroidery style now known as tenango is based on traditional Otomi embroidery of the area, but modified to create pieces to sell. This occurred in the 1960s when a regional drought severely disrupted the local economy’s dependence on subsistence agriculture. The origin of this innovation has been traced to the small community of San Nicolas in the municipality of Tenango de Doria. Originally the idea was to make and sell pepenado blouses, a kind of gathered and traditional blouse still worn here. However, these are very time-consuming to make and could not be sold for a sufficient price. Instead, embroidery elements were transferred to flat pieces of fabric. Even those sold for very little, especially at the beginning when the style was unknown. Over time, the embroidery style has been applied to tablecloths, napkins, pillow cases, bedspread, various styles of clothing and more. While the work is still primarily done by women, men have taken it up, not only in Tenango but in prison handcraft programs as well.